The party: Ori the Construct

Last time, Ori noticed an odd light near the moon. When his friends stepped out for some Scooby-Doo shenanigans, Ori decided to TELEPORT TO THE MOON without telling anyone.  The moon is artificial, covered with giant hexagonal mirrors.  A Kobold appeared and took him back to base in a cable car. 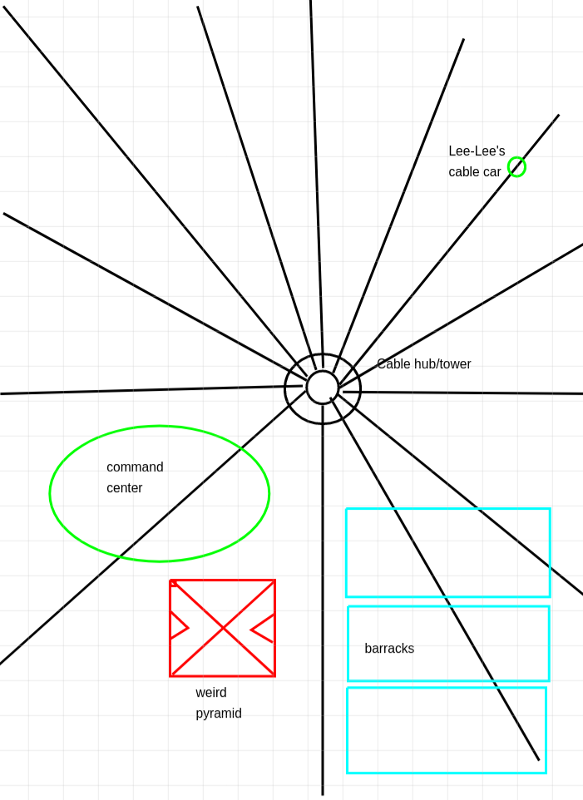 Cables converge from all directions to a central tower.  Beneath the tower are several bunkhouses, a control center, and a weird red pyramid.  Lee Lee IV, Ori’s Kobold guide, brings him into the command center. It looks like NASA mission control: a large room with big desks covered with gauges and lights. Ori has never seen anything this advanced. His creators must have advanced technology, but he does not remember the facility that built him.  Ori is impressed but not shocked.  The Kobolds are not used to visitors, so Ori’s entrance causes a stir.  Lee Lee IV brings Ori over to a certain desk and introduces him to Jim Jim IV. Lee Lee IV found Ori because Jim Jim IV saw a variance in his temperature readings and sent her to investigate.  Ori hopes he did not cause any damage to the system. Jim Jim IV reassures him that the variance was not that severe, but it’s procedure to investigate.  Jim Jim IV consults a handwritten manual to see what to do next. He can’t find any relevant instructions in his manual, so he sends Ori to see Junior.

Junior is an old Kobold in an elevated glass office at the back of the room. He’s clearly the boss, since his office lets him oversee the rest of the control stations in the room. He has more manuals than anyone else, and his copies are printed, not copied by hand.  Junior finds the instructions for people who arrive unexpectedly: check if they are vampires by exposing them to sunlight.  Junior and Ori step outside, and Ori has no reaction to the sunlight.  Ori asks if the Kobolds have problems with vampires. Junior explains that keeping this machine running properly will keep all dragonkind safe from vampires.  That’s an odd thing to say, since Dragons disappeared from Earth about a hundred years ago.  Fafnir is definitely an exception.  Ori asks if the Kobolds visit Earth, and if there are any Dragons here on the moon.  Junior says no to both.

Junior also says that intruders are expected to arrive from the red pyramid, not in the middle of nowhere, like Ori. He’s not sure what to do with Ori. There’s nothing in the manual about this situation.  Ori wants to explore the mysterious red pyramid. According to the manual, supplies may come from the pyramid, although none have arrived in a long time, but it’s also where intruders are most likely to arrive.

Ori leaves the command center to examine the red pyramid up close.  Whoever built this impressive machine may be a good master. He also wants to tell Fafnir about this important part of her people’s history.  The pyramid has big triangular doors on two of its four sides. the doors are closed, and hand-written signs on each say “DO NOT OPEN” Ori notices that this building is carved out of stone, while the other buildings in the facility are have modular pre-fab metal construction.  Ori opens the doors to look inside, which causes an alarm to go off. He can see a commotion in the command center. Kobolds will come here soon, so he needs to hurry! 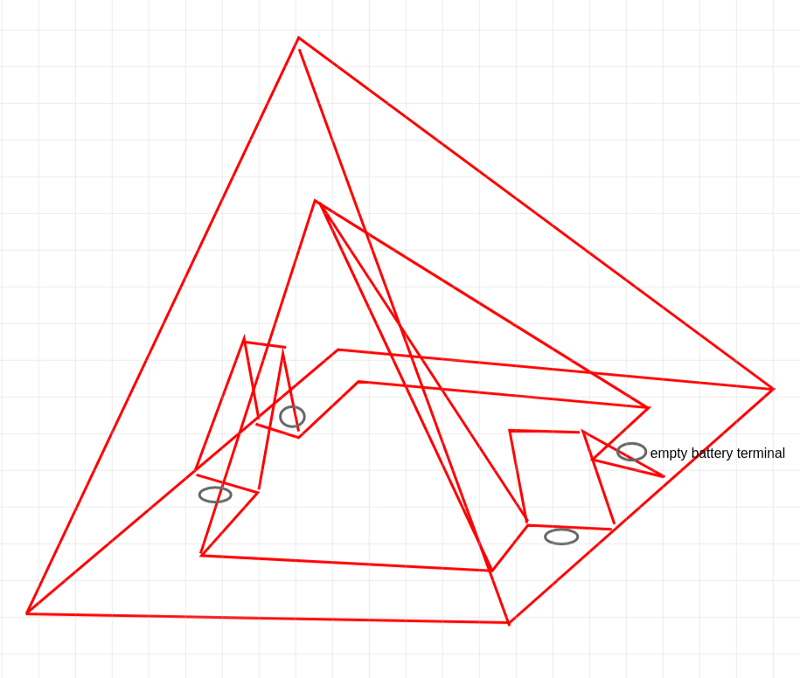 Inside the pyramid is a pyramidal room lined with a wire mesh cage. There are bigger structural metal beams filled in with wires about the thickness and spacing of chicken wire. There are four terminals for big batteries, but the batteries are gone. Ori realizes that this is a teleporter. If it was powered, it could swap the volume defined by the wire cage with the volume of another room somewhere else.  The teleporter would take a great deal of energy to power, but Ori is mostly energy. With the right wiring, he could probably power the teleporter with his own body. It would HURT! He hears a group of Kobolds approach the door he opened and chatter about how unusual this situation is. One Kobold apparently has amanual and other Kobolds are shouting section and page numbers to check.

Ori goes through the wire cage and tries to quietly slip out the other doors, but they fall on him, pinning him. A group of Kobolds come around the pyrmaids with shields and spears. Ori is surprised to see that they are going straight for physical confrontation, but to be fair, this is the place that vampire invaders are expected to emerge from.  Ori appeals to their devotion to procedure and says that the pyramid is malfunctioning! Look how these doors are malfunctioning! There’s non-standard signage!  Most of the Kobolds are distracted and huddle around a manual, but two Kobolds move to box Ori in. Knowing the Kobolds’ dependence on manuals and rule-following, he throws out a confusing barrage of claims. “I’m being tested by exposure to sunlight! Don’t interfere!” “This pyramid isn’t up to spec. The batteries are gone. Someone isn’t following the manual.” The Kobolds take him to Junior, because they don’t know what else to do.

GM note: We got a bit bogged down. Ori’s player kept getting partial successes on talking the Kobolds out of attacking him, so we just agreed that the situation needed to change and made it happen.

Junior is upset with Ori. Ori got permission to look around and immediately caused trouble and broke protocol.  Ori counters that protocol was already broken. The manual says to keep the pyramid powered to receive supplies, but the pyramid has no batteries.  Junior counters with a resource priority table in another volume of the manual. He shut down the pyramid to keep the cable car network running.

At this point, the ball of light that Ori originally came here to study is getting really bright. Its movement is visible to the naked eye. It won’t fall right on the command center, but it’s definitely headed for the moon.  Ori points out the imminent danger and says this should be Junior’s priority, not Ori’s protocol violations.  Junior says that the light must not be important, because there are no sensors or gauges dedicated to detecting or measuring it. Ori asks if there’s anything in the manuals about handling collisions, Junior starts flipping through several volumes. Before he finds an answer, the bright ball of light streaks over the horizon, and a few seconds later, the entire facility shakes! Gauges spike and alarms blare all over the control room. Kobolds scramble into action.

Several cable cars full of Kobolds are being dispatched to the affected area.  Since Ori is so interested in this light, Junior brings him along as a consultant.  They zip along the cables for several minutes. The impact site is not close. Eventually they have to stop and continue on foot, because several towers and the cables they suspended were destroyed. There’s a big smoking hole, surrounded by dozens of displaced and shattered mirrors.  Several mirrors have been flung into space, twirling and twinkling in the sky. Junior wants Ori’s opinion on what happened.  Ori surmises that the big ball of light hit the moon and exploded.  The energy didn’t dissipate during the long trip to the moon, so this was most likely an advanced weapon, aimed precisely at the moon.  Despite the great engineering effort and willpower required to fire a weapon from the earth to the moon, not much of the moon was affected. The damage spreads over hundreds of yards, but the moon is thousands of miles across. Ori sees two possible explanations:

Only an Artifact of Power would have the energy required to destroy the moon, either with a giant explosion, or by carpet bombing the surface of the moon.  Ori looks towards the earth and does not see any more shots incoming. This shot took about a day to reach the moon, so there will be time to notice any future attacks.  Ori worries that the attacker may adjust their aim based on this test shot and walk thier shots into the command center. There’s only one command center, so destroying it would disable the moon. Ori’s not quite sure what the moon does, but someone put a lot of effort into making it, and now someone else is putting a lot of effort into destroying it.

GM note: Ori’s player had some ideas about the unknown attacker that were smarter and scarier than the actual plan that I’ve given to Dr. Diana MacLeod.

Ori keeps most of this to himself, but tells Junior that this was a deliberate attack by someone on earth who wants to destroy the facility. More shots may follow, so Ori recommends that Junior power the pyramid and send a strike team to disable the weapon. Junior says that Ori must join the strike team and act as their guide.  Ori counter-offers: he will power the pyrmaid so Junior doesn’t have to shut down the cable cars, but once they return to earth, he will not be under their command.  Junior agrees. The Kobolds on the moon have their work cut out for them. Already Kobolds are requisitioning spare mirrors from storage, clearing debris, and repairing the fallen towers.

The strike team assembles: a group of Kobold Pokers with spears and shields, a group of Kobold Slingers with ranged weapons. Ori suggests that the strike team takes a copy of all the manuals instead of just hte volume on operating the pyramid.  Junior agrees and adds a bookkeeper to the team.  The strike team takes position inside the wire mesh teleportation volume inside the pyramid. Kobolds run wires from the battery terminals inside the mesh to Ori.  Ori winds all the negative wires around his foot spike, and takes two positive wires in each hand.  He jams the wires into his face! The purple energy that makes up most of his body crackles along the wires and a high-pitched whine gets louder and louder. As the energy starts flowing, it starts flowing faster, drawing more and more energy out of Ori. Ori’s energy starts to dim. Does he have enough in reserve to survive this? Yes! The wire mesh and everyone in it disappears. The battery wires fall to the floor, cut where they enter the teleportation volume.