The party: Lucia the Brave the Heir, Dryden of Conwall the Collector

Last time, Dryden & Lucia left Lady Evelynn in an elaborate death trap and slipped away without alerting her staff with the convincing and true excuse that something just fell out of the sky and hit the nearby town of Sugar’s Crossing.  They’ll go investigate, but if they don’t want Lady Evelynn to die, they’ll have to get back soonish.

The highway crosses the river at Sugar’s Crossing, and the great bridge, guarded by soldiers from around the region, over which so much commerce and travel crosses, has been split in half by a giant hexagonal mirror, probably 100 feet across! The mirror fell perpendicular to the highway and went right through, wedging itself in the river bed.  The whole town is in an uproar! People are bustling around on the bridge and on boats and rafts in the river.

Some workers on the bridge are trying to clear the rubble around the mirror so it can be moved away from the bridge (somehow!) but the rubble shifts and three of the workers fall into perilous positions!  Dryden fires a rope from his rope launcher to anchor to the supports under the bridge. He’s ready to swing into action, and his chance comes immediately, as one of the imperiled workers slips off the bridge and plummets towards the water!  Dryden swings in like Spider-Man, snatching the worker out of the air and landing safely on the shore.

Meanwhile, Lucia is running up to the bridge. One worker is hanging over the water and the other is trapped in a small space between the bridge and the hexagon.  If the mirror shifts again, the second worker could be crushed!  Lucia heads for the most immediate danger and lays down at the broken edge of the bridge and reaches a hand down for the trapped worker to grab. The cobblestones under her crumble, and Lucia tumbles into the narrow space as well! Dryden wolfs down a snack to regain the energy he needs to overcharge his flying disk, grabs his rope, and flies up to assist Lucia & the trapped worker.

GM note: Overcharge allows Dryden to either carry another person or fly for the entire scene, but he used both options simultaneously.

One more worker is in danger, hanging by his hands over the river.  Dryden puts down the worker he’s carrying and flies in to snatch up this worker.  The worker panics as Dryden tries to pick him up in passing and doesn’t let go of his handhold, so Dryden is yanked to a sudden stop, loses control, and they both fall into the river!  Lucia has run to the end of the bridge and down to the shore, and she jumps in and swims to the floundering worker.  She drags him to one of the many rafts and boats either trying to provide relief or caught in the traffic jam.  The owner of the raft isn’t happy about two unexpected passenger. He diverts to shore to let them off, but cusses Lucia out the whole way.

No one is in immediate danger anymore, so our heroes can take a deep breath.  Dryden recovers his rope launcher and a shard of mirror.  Naga guards shoo people away from the bridge and try to enforce some sort of order.  Dryden is relieved that the the mirror landed parallel to the flow of the river and not across it.  The mirror is big enough it might have blocked the river and flooded the town!  Is this giant mirror what MacLeod launched at the moon?  Lucia applies a healing poultice to her shrapnel wounds. She notices that someone scrawled “Buckle was here” on the hem of her sleeve.  Dryden realizes that the snack he ate in a hurry was a Halfling snack:  nuts and small fruits. Who has been messing with their stuff?

Lucia: Actually a giant metal mirror fell from the sky and blocked the river.

Callie blinks a few times in actual amazement before she can restore her uncaring facade. She opens the front door for them, but does not follow them inside. What do they do now?  It seems their earlier indiscretions have gone unnoticed thus far.  Lady Evelynn has been in the sleeping gas for about nine hours. If she stays there for three more hours, she’ll die. She’s definitely a bad person, but she hasn’t done anything against Lucia & Dryden personally. Can they just let her die? Not doing anything isn’t technically killing, right? They decide to look around the mansion a bit before deciding. 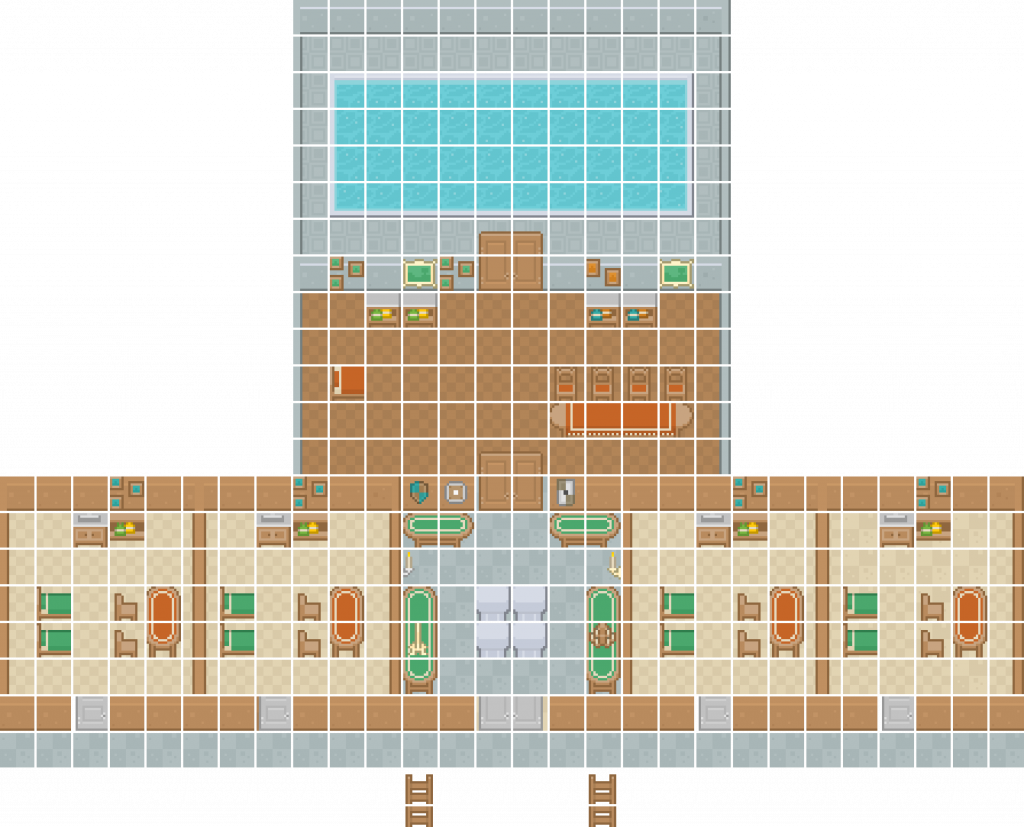 There’s a trophy room at the center of the upper floor: tables full of strange, sharp, unpleasant-looking items; Tapestries, paintings, and shields hung on the walls; a pedestal in the center of the room.  Dryden looks around and discovers a secret passage by moving one of the paintings on the north wall.  There are also locked double doors on the north wall.  Dryden investigates the pedestal in the middle of the room and unintentionally hits a secret switch, causing the pedestal to lower into the floor!  Dryden teeters on the edge of a pit!  Lucia pulls him back to safety.  (That secret switch is not in a good position.)  They hear footsteps approaching and dive into the secret passage to avoid notice.  Two servants enter the room and look around.  One presses another hidden switch and brings the pedestal back up. The servants wonder who moved it, and if anything is missing from the trophy room.  Lucia uses her secret bloodline power to make the servants forget the past few minutes.  They find themselves standing in the trophy room, which looks perfectly normal. Confused, they leave and return to their duties.

Lucia and Dryden explore the secret passage. There’s a ladder leading down, and access to the guest rooms on the second floor, including their room. There’s no access from the secret passage to the room behind the big locked doors, which they assume is Evelynn’s master bedroom.  Oh, right, Evelynn. They go back to the observatory to check on her. Dryden disables the trap on the door before entering. Evelynn and Jayce are still lying unmoving in the pulsating gas cloud.  The sun has risen, so Evelynn is casting a shadow. The lashers she used in the fight last night are nowhere to be found.  Dryden pokes the shadow cautiously, but it does not move.  He reaches into the gas cloud and picks up the bolas in the proper way, so the gravity waves suck all the sleeping gas back inside the bolas.  Evelynn and Jayce have been in the gas for about nine hours, so they will wake up in another nine hours.  She’s sure to warn MacLeod that Dryden & Lucia want to stop her when she awakes.

They are determined to get into Lady Evelynn’s room, so they return to the trophy room.  Dryden steals a harpoon gun, and collects the Ever-Burning Brand that he donated to Lady Evelynn’s collection earlier. It’s actually a bomb. The light is a side-effect.  He blows the doors off and they enter Lady Evelynn’s suite. It’s a huge room with a desk on one side.  The other side is dominated by a circular bed ten feet across covered in dozens of pillows. Another set of double doors are on the far wall. Lucia wants to read the documents on Evelynn’s desk, but the explosion has attracted attention!  Lucia hides in the bed. Dryden wants to hide under the bed, but this bed is directly on the ground. So weird!  He hides in a pile of pillows.  Three maids and cook burst through the smoking doorway and look around in a panic.  Two maids and the cook rush off to get water or warn people, so there’s only one maid left in the room. Lucia and Dryden run from the bed to the doors in the far wall, which lead to a swimming pool. The maid starts to chase them, but Lucia makes her forget & shuts the doors.  The maid re-discovers the explosion and runs off to alert people!

For a moment, Lucia & Dryden have the place to themselves. They look around the pool room. This is where Lucia and Gleador first met Lady Evelynn long ago. The pool is surrounded by big windows. They consider escaping through the windows, but looking out, they see Callie patrolling the yard with a Hell Hound. Lucia grabs some papers from Lady Evelynn’s desk which confirm that the Mayor of Templeton did NOT leave before breakfast, but was thrown into a secret dungeon in the basement. There’s also a work order for reinforcing security of the secret dungeon, after a recent jail-break freed all the prisoners.

Lucia & Dryden are sure they will never be welcome here again, and need to leave soon. How violent and spiteful should their exit be? They can’t bring themselves to execute a helpless enemy, so they will let Lady Evelynn live. They will, however, destroy her secret dungeon.  Dryden looks through the trophy room and finds an explosive device. She keeps a lot of nasty stuff in her trophy room! Not a nice lady!  The cook from earlier returns and sees them up to no good.  He comes at them with his cleaver and Lucia draws her sword to keep him back.  Dryden pulls out a terrifying, cursed weapon.  It’s basically a gladius, but the crossguard is a reflective globe. Looking into the reflective reveals a great fear.  The cook looks at the cursed sword and sees a long banquet table of sick, thin people. No matter what he serves them, they can’t eat it. He can’t please them. He can’t nourish them.  The cook breaks down in tears.

Lucia and Dryden have no time to comfort him. They run back to the pool. Dryden sets the charge and detonates it! The building shakes and the bottom of the pool collapses. Thousands of gallons of water crash down through the ground floor and into the basement, completely ruining them.  They smash open a window, Lucia holds on to Dryden, and he overcharges his flying stone to fly them both away!  A spectacular exit!