Last time, Buckle & Stella “saved” Templeton by returning the rightful Mayor (annoying as she is) to her seat of power and capturing the shape-shifting impostor in her place. For this, the Mayor grants them the Fellowship of Templeton, and offers several boons.  They choose to learn the location of a Source of Power, a legendary artifact of potentially earth-shaking power. They also get a room in a nice hotel in the tourist district to rest up for a week.

While they recover their health & gear, Buckle is excited to play tourist. He buys a fake hard hat with a plushie light on top. He’s a cute platypus wearing a cute hat with ear flaps.  Pomplamoose doesn’t want to wait a week to return home. Her home is just a little further to the east, so she announces that she’s heading out.  Stella and Buckle need the rest, so they don’t go with her.  Buckle is heartsick, but tries to hide it. Pomplamoose pats him on the head as she leaves.

After a week, Stella, Buckle, and their permanent companions: Silk, Gus, Rose, and Ugg head south towards the Oolite Mine, rumored site of a Source of Power.

GM note: The Oolite mine first affected this world before this world existed, back in the Fairmeadow Fair campaign. Despite searching for it for a long time, and even learning its location, the players in Feairmeadow Fair never visited it.

As the party walks down dusty paths between rolling hills, a giant spider suddenly appears. It’s about the size of Silk, a riding spider for Halflings.  It’s interested in Gus, who had a bad experience with spiders in the past. It took him a long time to trust Silk, and he doesn’t trust this spider. He runs in circles until Stella slaps him! She sends Silk to talk to his fellow spider.  Silk and the wild spider mirror each other in a dance with their many legs. This spider isn’t hostile, just curious.  It approaches Gus in a gesture of goodwill, then steals a snack from his pack and runs away.

Later, the party walks under the edge of a rock face and boulders start falling from the cliff above!  The party runs from the rolling boulders, and Buckle falls into a hole in the ground! There are lots of holes, and the remaining party members have to dodge the holes while outrunning the boulders!  Down in the hole, Buckle is surrounded by darkness. The ground he landed on wasn’t as hard as he expected.  His electro-sense detects someone down here with him! He calls out, and the creatures show themselves. Giant Dung Beetles!  Each Dung Beetle is the size of a hatchback car.  Buckle says he’s lost and confused, and they’re happy to explain. They collect the boulders for their young. The boulders are too big to fit down their tunnels, which is why one hasn’t landed on Buckle’s head. He asks the Dung Beetles to help his climb out of the tunnels and to assist his friends being chased by the boulders. They agree, but he must do something for them as well.  The Dung Beetles grow nutritious mushrooms in certain caverns, but some of those caverns have collapsed. Buckle is small enough to fit inside and retrieve the food. Buckle agrees to help.

Back on the surface. Buckle rises out of a hole in front of his teammates. He keeps rising, and the Dung Beetle he’s standing on also emerges from the tunnel. Other Dung Beetles emerge from other holes and stop the rolling boulders.  Stella and the companions can’t understand the Dung Beetles’ speech, but Buckle explains the situation. They all go into the tunnels to the stricken mushroom cavern.

A large boulder has fallen through the Dung Beetle’s tunnel, mostly blocking the entrance to the Mushroom Cavern. There is a tiny gap on one side: tiny for a car-sized Dung Beetle. Buckle is able to shimmy through without a problem. Inside, he finds the whole caverns has shifted. The ‘floor’ on which the mushrooms grow used to be horizontal, but now tilts sharply. There’s a square hole in the far side of the cavern that glows with an orange light.  Buckle cautious sneaks down the perfect square tunnel to investigate. The tunnel is six feet on a side, too small for the Dung Beetles, and too precise for their methods too. Buckle approaches a junction with another tunnel and carefully peers around the corner. A ways down the next tunnel are three metal statues, carved to look like Dwarves. These statues move on their own! They are pulling ore out of the tunnel walls and and putting it in hoppers on their backs, carved to look like backpacks. This is a mine operated by robots!

Buckle puts his weight on the wrong bit of stone and it collapses, making a loud noise.  The robots’ head quickly swivel towards the source of the noise, and one rings a bell. Another statue approaches. This one is also shaped like a Dwarf, but it carried a large shield, carved out of one giant crystal. As it approaches, a glittering aura appears on each statue within a certain distance. These four robots are advancing on Buckle’s position.  Buckle flees back through the mushroom cavern and pushes through the gap in the giant boulder. It shifts again, and Buckle slides out just in time!  He tells the party and the Dung Beetles about being chased by metal statues.

Stella: Buckle, are you sure you’re OK?

Buckle: I did get hit in the head, but I’m pretty sure it was all real.

Stella pats Buckle on the head.

These mining robots might be connected to the Oolite mine. The party investigates above ground. The terrain is pretty barren: low gravelly hills one after the other. As they crest one hill, the next hill is gone! There’s a hole where the hills should be: a strip mine. 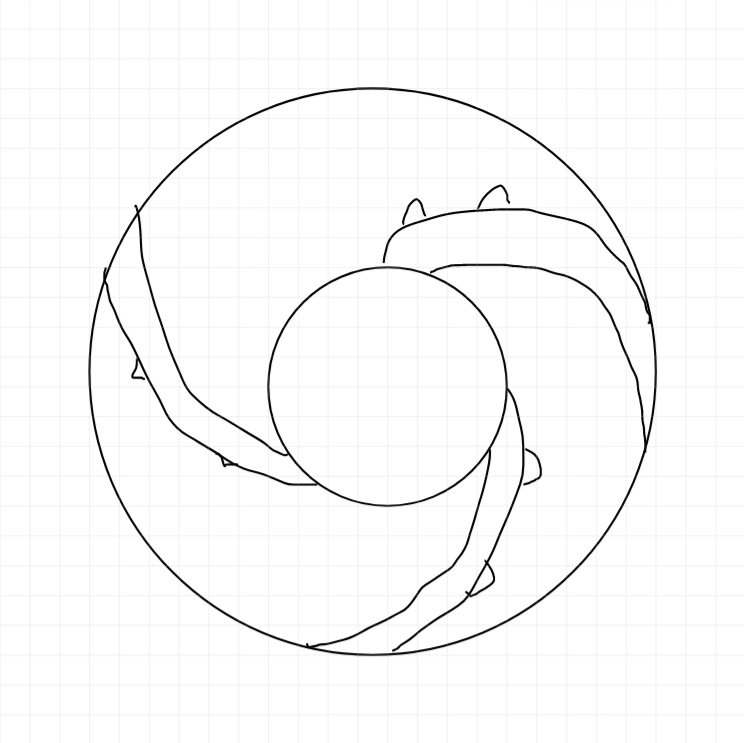 The mine is shaped like a shallow funnel with a flat bottom. Three paths spiral down the sides fo the funnel, with square tunnel entrances along their length. Dwarf statues bustle about, moving ore.

Stella is embarrassed.  They observe the robots for a while. Most look like miners, but there are a few holding big crystal shields. The shield-bearers provide a glittering aura to nearby robots, but they themselves do not have the aura.  Buckle looks around for a boss or foreman. When one emerges, Buckle wishes he hadn’t seen it! This used to be a mining robot, or maybe several. Now it’s much bigger, stretched out, with parts of other robots bolted to it. Its chest bulges and its whole body glows with heat. Surely that is the Source of Power!

Stella: Square holes. Anything is possible.

Buckle rises from the tunnel entrance on the back of Dung Beetle, as other Dung Beetles emerge from holes all around Stella and the companions.

Together they form a War Council and plan their assault on the Robot mine.