Party: Fafnir the Dragon, Stella the Halfling, Buckle the Platyperson

The full moon will rise tonight, so it’s time for Platypalooza, the greatest celebration of Platyperson culture!  A party boat heading upriver spots Buckle and invites him and his companions to join.  They do, and the boat goes up the Mighty River and takes a tributary to the north to the Platyperson town of Bogden.  Paulie, the former mobster, is also on the boat, but there’s no reason to fight anymore. 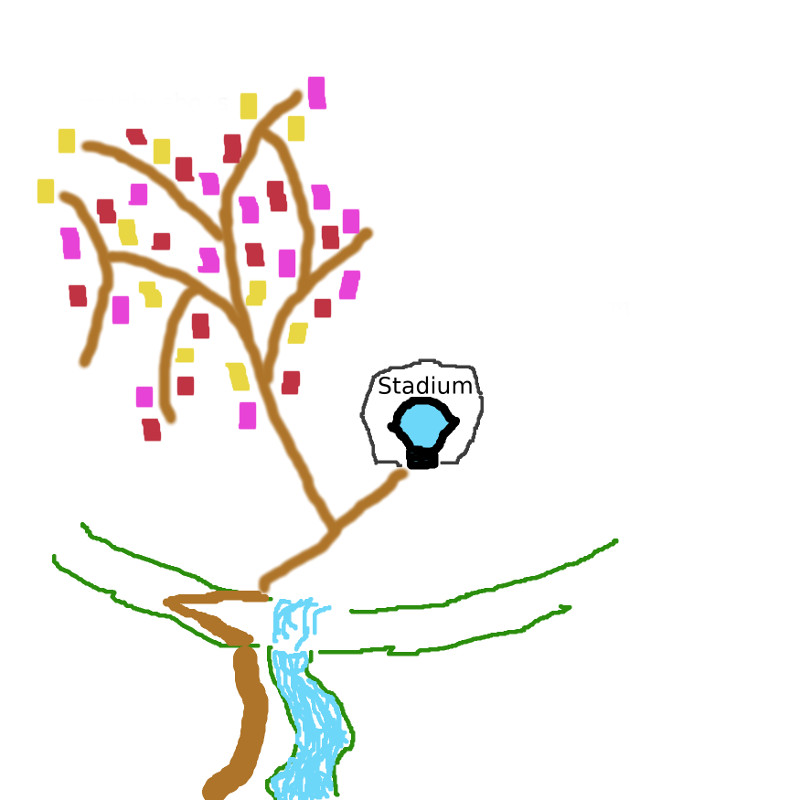 From the river, all that’s visible is the great dam of Bogden, which creates a large, flat marsh suitable for Playtpeople living. the waterfall prevents the party boat from advancing further, so everyone has to disembark and walk up the switchbacks to the top of the dam.  Bogden is a village year-round, but Platypalooza temporarily makes it a vast city. Platypeople from all over the continent come here to celebrate, and people from other cultures also attend because it’s a great party. The permanent dwellings are off in the back. and most of the artificial marsh is a fairground, with booths, stages, games, and so on.

The leader of Bogden officially kicks off the festivities with an opening speech, but our crew realizes that he’s a tricky politician. Listening to his speech will damage their Sense, so they ignore him and explore the shops and stalls.  Fafnir loves food and Buckle points out traditional Platyperson food.  Lots of fried food. There are giant spider legs on skewers, competing hot sauce vendors shouting about the virtues of their special recipes, and so on.  One booth has a challenge: eat a spicy seed pod. Only a few seeds are needed for a whole pot of hot sauce.  Fafnir jumps at the chance, and since she’s immune to damage from fire and heat, she has no problem eating the spicy seeds!  She gladly receives the cheers of onlookers and a sampler platter from the impressed vendor.

Stella finds Clara, a fellow Halfling running a booth.  Clara sells pastries, which are a staple in Halfling culture, but an exotic treat to Platypeople.  Clara is one of many Halflings who fled the Halfling homeland during the Giant War, a war against Giants. Part of the reason that Stella explores this continent is to find scattered Halflings and tell them the good news: It’s safe to return home. The war is over! The Halflings won by surrendering! Instead of fighting the physically superior Giants, Halflings let them settle in Halfing towns, then relentlessly pranked them until the giants got so annoyed that they fled!  Clara is delighted to hear the news ,and starts a batch of celebratory peace cookies.  Stella asks if Clara knows where other Halflings are. There’s usually one in every city.  Clara mentions Sam, living in a walled city to the north. Stella and Clara say farewell with the old Halfling saying, “You always have a home.”

As the crew is moving through the crowd, looking for more fun, a large Platyperson roughly shoulders past Fafnir.  Fafnir won’t stand for such ill-treatment.  “I’m not stairs! You can’t just stomp over me!” The large Platyperson is The Champ! He says “I’m on my way to win the Fluming championship again. There’s still time for you to sign up. Meet me on the field and see how easily I can stomp over you!”  It’s on now!  Fafnir, Stella, and Buckle rush to sign up for the tournament.  Fortunately, Buckle can explain the rules of the traditional Platyperson game to the Dragon and the Halfling.  Silk, Gus, and Rose will cheer from the stands.

Each team has to take a log from the log pile, stand it upright at their base, and climb it.  One point for reaching the top. One bonus point for flipping the log during the dismount, but failing the dismount costs one point.  It’s a foul to clearly hit with another player, so don’t get caught! The field is flooded, since Platypeople are amphibious.

The first team that the crew faces in the preliminary round is three lumberjacks. The referee slaps his tail to begin the match, and everyone rushes for the log pile!  Stella keeps the lumberjacks busy while Fafnir and Buckle grab a log.  Fafnir is ready to climb the log, but Buckle can’t raise it himself. Fafnir switches with Stella so she can help raise the log. Once it’s up, Fafnir runs from the lumberjacks, spreads her wings, and flies to the top of the log! One point!  A flippy dismount for a bonus point and it’s 2-0.  Fafnir goes in to get another log, but the lumberjacks block her path out. She’s super-strong, so she picks up the log and flies over them, dropping the log to her teammates and continuing into the stands.  Stella and Buckle raise the log, and Stella flies in to land on top. Foul! It’s illegal to score from out of bounds! The crew loses a point instead of gaining it. Next, Fafnir interferes with the lumberjacks and gets caught. She has to wear a penalty vest, restricting her movement. The vest is designed for Platypeople, so it’s especially awkward on her. She’s around the same size, but has more limbs, and in different positions.  The field is reset, and when the refereee slaps his tail, Fafnir and all three lumberjacks rush for a log. Fafnir draws their attention by running in a figure-8. With all three focused on her, there’s no one left to score or prevent Stella and Buckle from scoring. Buckle is barely able to lift the log by himself, and Stella struggling upwards, barely slapping one hand on top. It counts!  The crew wins and goes to the next round of the tournament!

Now that they have the hang of this, the crew is able to beat other opponents and reach the finals, against The Champ and his dangerous team!  The match begins at sunset, and the stands are packed as most other events have wrapped up, and everyone wants to see the final showdown!  Big lenses on towers around the arena catch the last light of sunset and focus a spotlight on the referee, as he announces the two teams and hypes up the crowd.

The Champ’s team is mean and effective. In addition to the Champ, widely known as the greatest individual player the game has ever know, there’s a Brawler, tough and strong; and a Hunter, who disappears under the shallow water to reappear at an inconvenient time. The crew huddles to discuss strategy before charging into battle.

At the tail slap, Stella and Fafnir rush for a log.  Champ and Brawler get in their way, and Hunter silently slips under the water, disappearing.  Stella insults Brawler’s mother as she tries to slip by, and he angrily slams her into the stack of logs. Obvious foul!  The field is reset.  At the tail slap, Champ heads right for Fafnir. Stella moves to intercept, but Champ dodges to the side and kicks her leg as he passes. Stella falls into the water and is face to face with Hunter, who strikes her again.  No call from the ref.  Meanwhile, Fafnir and Buckle try to keep Brawler away from the logs, but he wrestles one away from them.  Stella gets in Champ’s face to keep him busy, and snatches something from his pockets while he’s distracting.  It’s blackmail material on the referee! No wonder our crew aren’t getting the calls they deserve! Fafnir and Buckle steal Brawler’s log back. While the three are tussling near the stack of logs, Fafnir breathes fire, setting fire to the whole stack! Flaunting her immunity, she climbs on top of the flaming pyre and lies down.  Brawler and Buckle fall into the fire and catch a light!  Fafnir grabs Buckle and hurls him out to their goal, where the shallow water extinguishes his flames.  She follows that up by hurling a flaming caber out to Buckle.  Stella tries to set the log up for Buckle to climb, but Brawler is coming for her!

During this exciting match, the sun has set, and the full moon has risen.  The cheers from the massed spectators turn into screams! People start running, and three large figures emerge. Three werewolves: one of the left, one of the right, one near Stella’s companions! Buckle looks closely and realizes that the bite of these monsters can turn its victims into more werewolves! He yells at the crwod to run!  A werewolf slashes at Silk, knocking it out of the stands into the flooded playing field.  This clears space around the werewolf, so Fafnir seizes the opportunity, hefting a flaming log, and throws it like a mighty javelin! It strikes the  werewolf and carries it through the stands! Nothing left but a pile of flaming debris!  Buckle assists Silk, and Stella engages one of the remaining werewolves to keep it away from civilians. It still has clothes and pockets, and she swipes a slingshot.  Fafnir’s about to leap into battle, but the Champ is upon her.  He yells, “You’ve ruined the game, and you’ve stolen my spotlight!” and throws a mighty punch.  Fafnir catches the Champ’s fist in her claws and her face shines with the power of her conviction. She says, “You say you’re the hero of these people?  Prove it! Save them from these creatures!” The Champ is stirred by her impassioned speech. He agrees, but after they beat these monsters, he wants to finish the game and beat Fafnir. the Champ strides towards the werewolf by Stella. The werewolf swings down with his massive paw. The Champ dodges the paw, which crashes into the benches.  The champ steps on the paw, pinning the werewolf, and winds up a powerful blow to the jaw. These things don’t look so scary after that humiliation.  Stella finishes that werewolf with its own slingshot. As the werewolf crumples to hte ground, it transforms back into the Platyperson that it used to be.

Was that all of them?  Some people are hiding under benches. Other have fled the stadium and cowering in tents around the fairground. There’s a third werewolf that no one engaged! It left the stadium and is running for a tent full of helpless civilians!  Fafnir flings herself into the air and hastily attacks form the air! This will be an awkward landing that leaves her in a bad position in front of rampaging, but she’ll land a mighty blow first.  The blow is enough! They both crash to the ground, but only Fafnir gets back up. The werewolf also shrinks back into a human form as it dies.

All the stands and booths have hastily closed. Shopkeepers and partiers alike are fleeing the area.  The Champ wants to continue the game, but Hunter disappeared in the chaos and hasn’t re-emerged. The referee declares that hte Champ’s team can’t continue and must forfeit! The Champ is going to tell the referee something, but notices that he no longer has the blackmail material!  He’s lost the game, lost his leverage, and Fafnir outshone him in combat. His defeat is thorough!  He stomps away, but his little webbed feet make funny slapping noises.  The Mayor of Bogden hails out crew as heroes! they receive the prize money, and for saving the town, he tells them a secret:  There’s a legendary magical site under extinct volcanoes to the south.  The crew examines the blackmail material. Platypeople don’t use paper, since it would dissolve in water, so documents are written on wax tablets. These documents prove that the referee is actually a beaver with a false bill, not a Platyperson at all!