Party: Fafnir the Dragon, Stella the Halfling, Agnes the Harbinger, Buckle the Platyperson, and Rook the Remnant.

Fafnir spent the night sleeping under a porch after chasing a lanky black cat. The next morning, she happens upon the rest of the party as they are walking through the streets.  “Good to see you, Dad,” she says to Buckle.  She doesn’t know anything about the trouble last night, and just wants breakfast.  The black cat is walking along with them and Agnes has a vision that this cat will save the world. A magenta Pomeranian appears and chases the black cat.  As the party chases the two animals, a mobster named Billy appears to grab the Pomeranian.  That’s not OK! These are our pets now! Agnes tries to wrest the dog away from Billy and he tosses her aside.  Fafnir flies past at high speed and grabs the dog, but Billy punches her as she passes.  Billy sees that it’s five against one and flees.  Rook floats silently after him, hoping that he’ll go somewhere dark. If he does, Rook will make sure he never emerges.  Since it’s morning, even the narrow alleys aren’t dark. Billy returns to the aquarium and goes inside. It’s dark in there, but Rook can’t enter without an invitation, so they returns to the rest of the party.

The magenta Pomeranian that the mobster was after is named Wallace.  Agnes wants to know who owns this brightly colored pooch, so she holds its collar aloft.  She sees through the eyes of the owner, swimming over kelp fields towards and underwater city, holding a large bag.

GM note: We had a lengthy discussion about the definition of ownership. Is Wallace a possession of its owner? What happens if Agnes holds a mobster aloft? Do pets own their toys and collars? We decided that living creatures are not possessions, but objects given to pets belong to their owners.

Agnes holds Wallace up to Buckle, who can speak to any beast and asks questions through her interpreter.  Wallace lives in a house with other animals. He can’t read and is colorblind, so he can’t give an address or describe the place satisfactorily. Agnes asks if she is his favorite, and Wallace heartily agrees, licking her hands for emphasis.  Agnes tries to overcome her grim demeanor and smile, but it’s hard. Wallace does remember the way home, so he leads the group there: an aquarium 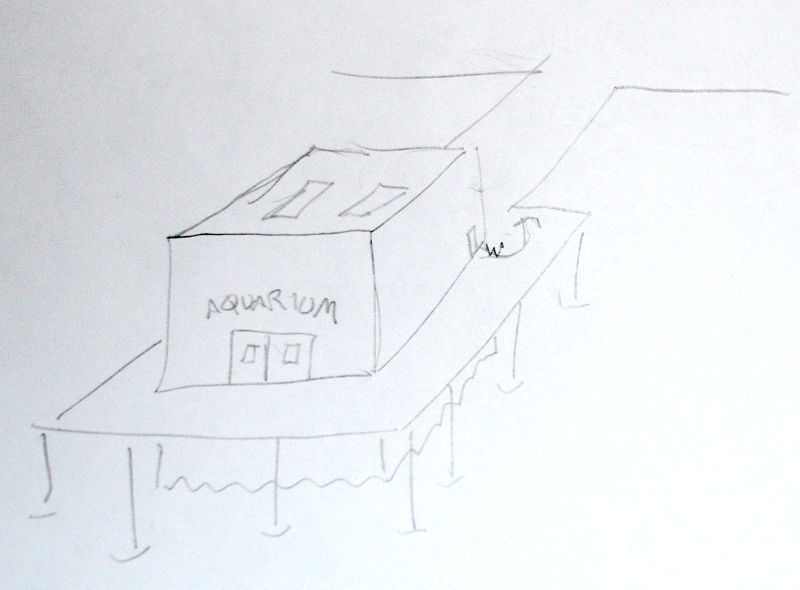 Agnes uses sight beyond sight to look through the wall of the building and sees two figures: a human and a Platyperson. The team prepares to breach the building. Fafnir and Stella are on the roof, reaching it through flight and wall-crawling spider mount, respectively.  Agnes, Buckle, and Wallace the magenta Pomeranian form up at the back door.  Stella’s companions, Gus and Rose, cover the front door. Rook is ready to float to whichever area needs help.

Paulie, the Platyperson, bursts out of the back door.  Fafnir leaps from the roof, grabs Paulie’s head on the way down, and smashes it into the boardwalk with all her weight behind it. Paulie’s still conscious. She gathers herself and lifts her head despite Fafnir’s efforts to keep her down. Paulie draws a nasty weapon, the limb bone of some large creature, with one end snapped off into splinters. She flails about, endangering everyone nearby. Rook approaches and uses his hypnotic voice to calm her so Buckle and Fafnir can get clear. Stella puts a pit trap in the boardwalk between Paulie and her friends.

Billy, the human mobster that fought the crew earlier today, makes a break for the front door. Gus and Rose try to hold him back. Gus is a cook, and forcibly Cinnamon Challenges Billy. While Billy is busy sputtering and coughing, Stella runs over to talk him down. Billy went after Wallace so aggressively because his whole life had been disrupted when the mob was betrayed by one of their own, their leader exiled, and their prized animals scattered. Billy was trying to reclaim the animals (like Wallace) to reclaim a semblance of the order his life used to have. Stella is sympathetic, but says that holding onto the past doesn’t work, and that Billy needs to act on what’s happening now, not what he wishes was still happening. Billy is really encouraged by these wise words.

Paulie is still mad and goes after Buckle, but falls into the pit trap, which drops her into the river. This just lets her escape, since Platypeople are excellent swimmers. Buckle dives in to pursue her, and has a heart to heart talk with her.  She and Billy were trying to hold on to the mobster way of life after their headquarters was smashed up and their people scattered. Paulie (mechanically a “Beast Loner”) realizes that she doesn’t need to cling to this structure that doesn’t even exist anymore. She’s capable on her own. She swims off to make her own way in the world.

Things seem handled here in Port Fennrick, so the crew decides to head up the Mighty River. As they walk upriver, they meet a boat coming down river. It was attacked and is on river. Buckle uses Tail Slap to splash water over the burning boat and put it out.  They ask how the boat caught fire, and the captain says that it certainly wasn’t a fire-breathing lizard. Those have been extinct for a hundred years!  Fafnir fumes, literally.  Agnes tells her to behave, or she’ll withhold Fafnir’s snacks. Fafnir’s Kobold companion Coco will feed Fafnir, so Agnes’ threat is blunted.

Further upriver, Stella’s riding spider (named Silk) bolts off the path after a bird. It’s the chrome songbird that Ori and Melvin released a while back. The chrome bird, (a Crow-m, perhaps?) sings a piercing note that resonates at the frequency of reality itself, and manifests a coiled spring underneath Silk, sending Silk flying into the air. Silk and Stella decide not to mess with this bird and return to the path. Rook is happy, because Songbirds were considered extinct. Nice to know a few are still around.

Further upriver, mysterious music floats through the air. “Do you hear that?” Agnes retorts, “I’m blind, not deaf!”  Fafnir flies ahead to investigate and finds Slick (ex-pirate) playing a harmonica next to a campfire, with a traveller’s bindle nearby.  This is what people do when they are sad and they have nowhere to go, right?  Fafnir likes his music and asks to hear more. Slick is pleased and plays very fast.  Fafnir is impressed. People would like to hear this music. You could be in show business.  Slick is encouraged to hear this. He’s got a goal to aim for now.  He thanks Fafnir and runs towards Port Fennrick at incredible speed to start a new life as an entertainer!

Further upriver, Agnes notices something sparkling on the riverbed. Fafnir hates water and won’t investigate. Agnes sends Wallace, but Wallace is unable to dislodge it from the riverbed. Agnes cuddles him and tells him he’s a good boy and tried his best.  Agnes sends Snek down to investigate and discovers that it’s a hatch, mostly buried under mud. Snek has no hands and can’t open it.  Agnes tells Buckle to go open it, but he puts his foot down and demands that he use his proper name. In the last day she’s called him “Beagle”, “Bickley”, and “Buckley”. His name is Buckle!  With that settled, Buckle swims down to grab the valve. With remote assistance from Agnes, he pulls the valve open, revealing a tunnel beneath the river! Rook floats down into it and finds a hidden tunnel network. There’s a station nearby with a stairway concealed by a false rock. Fafnir pushes the rock aside from the top, and the crew heads down into the mysterious depths.