The party: Agnes Nutter the Harbinger, Buckle the Platyperson, Rook the Remnant

Anges and Rook quickly leave Thaumatown and arrive in Bogden in the aftermath of a werewolf attack!  Most of the people who arrived to celebrate Platypalooza are fleeing in panic.  Those bitten by the werewolves have been put in cages. There is spirited debate about how dangerous they are and what to do with them.  Festival goers are mourning the victims of the werewolves, and the werewolves themselves. Agnes grabs a fleeing Buckle and they all duck into an empty shed. Agnes demands an explanation from Buckle. Buckle gives a brief summary of last night’s werewolf attack. Buckle’s consistently bad at telling stories, but Agnes gets the gist.

Nobody wants to stay in Bogden to help, and they aren’t welcome in Thaumatown either.  People in both towns indicated that twin volcanoes to the south were important, so the crew decides to head that way. They join the hurried exodus of partygoers.  Crowding is no problem for Rook, who just floats through people. This startles someone, who throws a punch at this strange phantom. Her fist goes right through Rook and hits the next person. This causes a confused scuffle/stampede! Rook shrugs, since the fight won’t affect him any more than the crowd did, but he uses his hypnotic voice to dazzle the crowd into calming down.

The crew reaches the Mighty River and needs to get across. Rook just floats across, dragging his toes in the water.  Wallace (the magenta Pomeranian) is scared of water and won’t approach the river!  Buckle makes a blindfold of Wallace, and holds the dog on his belly as he floats across. Agnes flies over the river on Snek.

On the far bank, they are beset by Platythugs: young ruffians with switchblades shaking down travelers for cash!  Agnes is not impressed. She declares a terrible curse in a big spooky voice. Whenever they threaten someone, they will poop their pants! To break this curse, they must help 20 people. One platythug doesn’t believe this weird lady and her big talk, so he threatens her, and finds out she wasn’t kidding! The whole gang flees in terror!

The crew approaches the twin volcanoes and must decide which one to investigate.  Anges flies ahead on Snek to scout. She discovers that the smoke from the eastern peak isn’t volcanic smoke. It’s from wood and garbage. She also sees Brainaic (who arrested her in Thaumatown) climbing the eastern peak. She flies into the Caldera and sees it’s covered with pipes, smokestacks, and hatches. A very unnatural mountain.  She returns to share this information with the team. They sent the Brainiac this way to get rid of him, but he’s on the trail of something amazing!  Rook says “We thought this was a fool’s errand” and Buckle replies “We are also fools.”

Buckle and Agnes follow Brianiac stealthily. Brainiac looks over the lip of the caldera, gets excited, and rappels over the edge. Rook just floats through the mountian, but discovers metal structures that count as “inside” that he cannot enter without permission.  Buckle & Agnes peer over the edge to see what Brainiac is doing.  Brainaic swings at the end of the rope to reach a door in the wall and go inside.  Agnes and Buckle look around, but there are no doors or access panels on top of the caldera. To get inside, they need to go down into the pit.  Buckle uses Brianiac’s rope to swing to the same door that Brainiac used. He invites Rook inside, and Agnes flies in as well, thanks to Snek.  Inside the door is a smooth metal ramp leading up into the mountain, with a swinging door at the end.  Rook scouts ahead and peeks their head through the door. It reveals the top of an elevator shaft, and the elevator car is headed down with Brainiac inside! 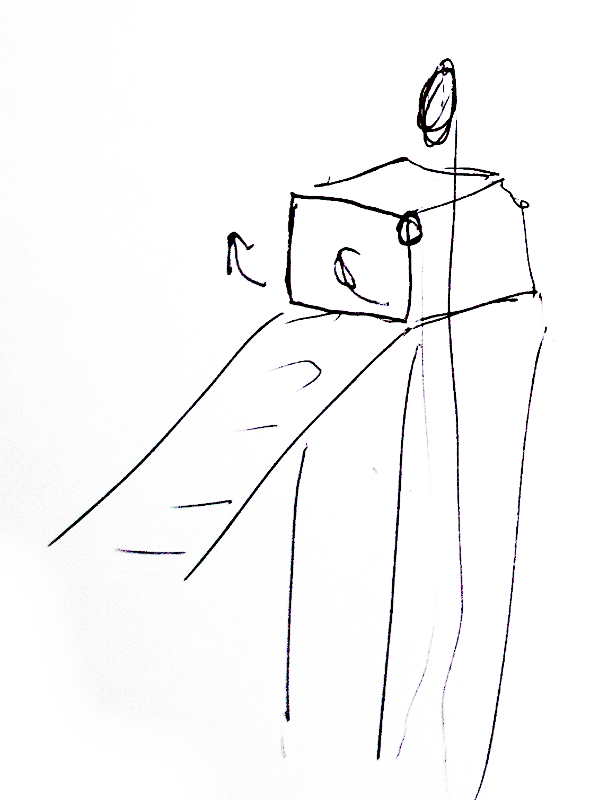 When the car reaches the bottom of the shaft, Brianiac slips out and hides as a team of Goblins start loading trash into it.  Rook returns to report to the rest of the team, and htey discuss what to do next. They take so long discussing that the car is filled with trash and sent to the top of shaft, where it tips out and starts sliding down the ramp! The crew is trapped between an avalanche of garbage and a sheer drop! Not Rook, of course. Trash just passes through them. Agnes flies out, and Buckle runs for it, but is bowled over by the tide of garbage. Agnes, flaoting by the mouth of the chute, grabs Buckle as he falls out, but she’s pulled off of Snek by his weight, and now they are both falling!  Snek dives, coils around both of them, and pulls out before they and the mass of garbage smash into the ever-burning trash heap below! Agnes gets bonked on the head by a toaster, and the whole scene is witnessed by an amazed Goblin on a lower walkway!  Agnes waves and the Goblin hurries back inside the mountain.  Buckle would very much like to be put down now.  Snek deposits him on the walkway that the Goblin used, and they all follow the Goblin inside.

Rook asks the goblin to help them find Brainiac, saying that he’s a shady character who means the Goblins ill.  This seems reasonable to the Goblin, whose name is Grickle. Buckle is just tickled to meet Grickle. With Grinkle leading the way through the tangle of pipes, catwalks, and tunnels, they spot Brainiac down below. He activates a booby trap, bursting a steam pipe and burning Agnes!  Brianiac runs for it and Rook follows. Agnes sends Snek ahead to block Brainiac’s escape route with a cloud of poison gas! This lets Rook catch up to Brainiac, but Rook lets him go.  Brainiac flees the facillity, passing a crew of Goblins headed to repair the damage from his trap. The Goblins arrive at the broken pipe and blame the unauthorized intruders (Agnes and Buckle) for the damage. Agnes says they are after the real intruder, who actually did the damage. Grickle confirms her story. Agnes asks the repair crew to help search for Brainiac, but they need to fix this pipe first.  (Also, Agnes is pretty creepy.)

So the crew leaves the sanitation facility and emerges into Swallet, the underground city of Goblins.  It’s really hot down here, and they don’t know where Brainiac went.